My novel BREAKING LIBERATOR’S SHACKLES, on a Kindle 99 cent special until Wednesday, was submitted for the WRITER’S DIGEST Self-Published Book Awards.  It did not win, but I am happy with the commentary provided by the judge.  The following is copied from this commentary:

“Terry Wilson’s Breaking Liberator’s Shackles is one of the most inspirational war novels I’ve read! True to life events of being a P.O.W. in a Japanese internment camp come to life as Grant Metzger gives his son advice before his son’s deployment. Grant is freed from emotional bondage as he recounts survival tactics he and his colleagues used to survive the brutality they encountered as prisoners…

…Thank you for the privilege of reading your book. I liked how you inserted your faith into the story without being “preachy.””

The novel is available on Kindle for a reduced price of 99 Cents until Wednesday.  http://amazon.com/Mr.-Terry-L-Wilson/e/B00IOQ8651 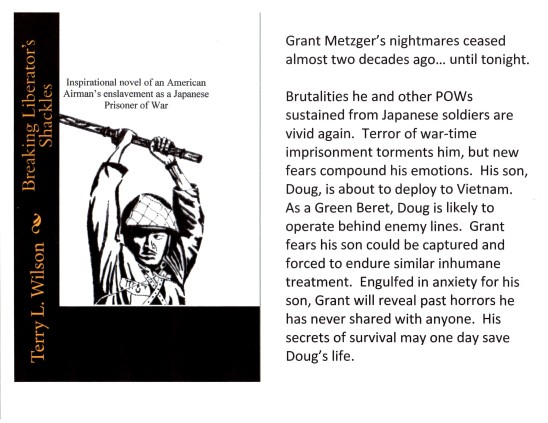