Book Review by Bob Edmonds published on August 9, 2018 in the McCormick Messenger. Mr. Edmonds has long written weekly book reviews for this newspaper, and is noted as both an author and historian. To date he has published fifteen books. He is a past president of the South Carolina Historical Society and a recipient of the Order of the Palmetto, South Carolina’s highest civilian award. 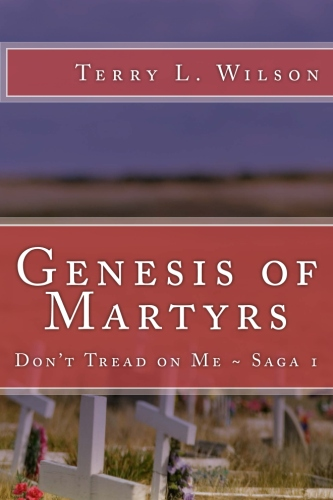 Genesis of Martyrs: Don’t Tread on Me ~ Saga 1, a historical novel by Terry L. Wilson, 370 pages.

Terry Wilson’s researching and writing of Geneses of Martyrs: Don’t Tread on Me ~ Saga 1 without a doubt will bring forth his most significant and lasting work to date.

Wilson’s goals are powerful. “As I have moved into my senior years I find myself disturbed as I have witnessed younger generations with little or no understanding of the struggles associated with the creation of the greatest democratic republic that has ever existed.

“My goal from the outset has been to weave history into a novel format capable of holding the reader’s attention. My wish is to be informative without lecturing, to portray accuracy of historical events without being politically correct and to bring to life, by giving voice to the heroes and villains of a period more than two centuries ago based on their historical traits I discovered during my research. My hope is that the reader will relate to how people of the Eighteenth Century were in many ways the same as contemporary people. It was common to dream, complain and seek comfort with friends and family while having a side that would scheme, be abusive and slander to achieve one’s objectives.

“My intent is to continue this story with additional sagas. Upon completion, my goal is to have portrayed a complete work of what is known as the American Revolution … the events which caused it, the struggles of a war against the World’s superior military forces and the unification of thirteen Colonies, maintaining conflicting agendas for government, into the United States of America. I promise that each Saga will be written true to my commitment of presenting history wearing a mask of fiction.”

Wilson’s Genesis of Martyrs: Don’t Tread on Me ~ Saga 1 brings the first-volume survey of the American Revolution that is both objective and comprehensive. The book is an outstanding narrative historical novel that traces the growth of a conflict that inexorably set the American colonies on the road to independence … these Americans who saw themselves as a member of society who were willing to put principle into practices, who had the initiative to seek and make new opportunities, to suffer hardship and privation, all to create better lives for their families and subsequent generations.

Wilson’s new book is crisply written, factual, and highly readable. The volume invites serious reflection by all present-day Americans. His prior works include Breaking Liberator’s Shackles, The Blanket Hill Insurgency and Tarnished Valor.